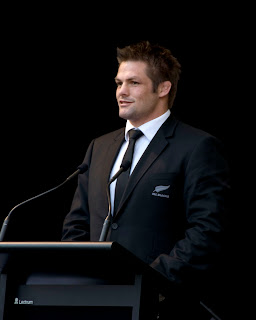 Richard McCaw, or ‘Richie’ as he is widely known, is captain of the All Blacks and is generally recognised as the world’s best openside flanker.

McCaw has the size and strength to be a punishing defender, the cool head and quick hands required to master the breakdown area, and the speed and handling skills to play a traditional tearaway’s linking role to superb effect.

The statistics on McCaw's career speak for themselves (to end of 2011 season):

McCaw was named as All Blacks captain for the first time for the Test against Wales in 2004 aged just 23.

He was brought up in North Otago and educated at Otago Boys High, where he played his rugby at No 8.

A tireless worker who reads the game well, McCaw was voted as Newcomer of the Year by the International Rugby Players Association in 2002.

He had an outstanding 2003 Rugby World Cup and won the New Zealand player of the year award at the 2003 (and 2006) Steinlager Rugby Awards.

McCaw led Canterbury to the NPC title in 2004 and then took the Crusaders to back-to-back Super Rugby titles in 2005 and 2006 before assuming command of the national team.

He was awarded the IRB Player of the Year award in 2006 after being a finalist in both the International Rugby Players' Association and IRB awards in 2003 and again for the IRB in 2005.

In 2008 McCaw would rebound from the disappointment of the World Cup to again lead the Crusaders to Super Rugby success, and then came back from injury early in the test season to lead the All Blacks to another Investec Tri Nations title and a Grand Slam of the Home Nations.

The following year he returned from injury for the Tri Nations and was prominent in matches against the Wallabies and again on the end of year tour, getting his second IRB World Player of the Year title.

In 2010, McCaw was again outstanding despite the new law interpretations which many believed would curtail the influence of the mercurial openside.

He lead the All Blacks to 13 victories in 14 Tests, with the team winning the Tri Nations and again achieving the Grand Slam.